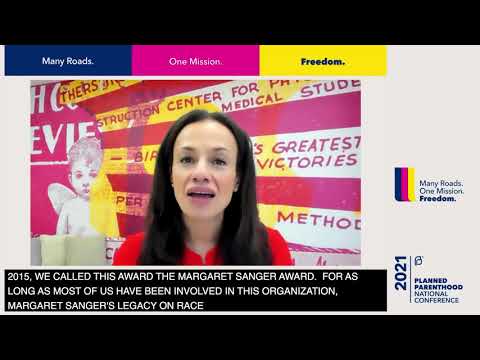 Planned Parenthood traces its roots back to a nurse named Margaret Sanger. Sanger grew up in an Irish family of 11 children in Corning, New York. Her mother, in fragile health from many pregnancies, including seven miscarriages, died at age 50 of tuberculosis. Her mother’s story — along with her work as a nurse on the Lower East Side of New York — inspired Sanger to travel to Europe and study birth control methods at a time when educating people about birth control was illegal in the United States.

On October 16, 1916, Sanger — together with her sister Ethel Byrne and activist Fania Mindell — opened the country’s first birth control clinic in Brownsville, Brooklyn. Women lined up down the block to get birth control information and advice from Sanger, Byrne, and Mindell.

Nine days later, police raided the clinic and shut it down. All three women were charged with crimes related to sharing birth control information. Sanger refused to pay the fine and spent 30 days in jail, where she educated other inmates about birth control.

Although the Brownsville clinic was shut down, Sanger went on to travel the country to share her vision — a vision that had deeply harmful blind spots.

Sanger believed in eugenics — an inherently racist and ableist ideology that labeled certain people unfit to have children. Eugenics is the theory that society can be improved through planned breeding for “desirable traits” like intelligence and industriousness. In the early 20th century eugenic ideas were popular among highly educated, privileged, and mostly white Americans. Margaret Sanger pronounced her belief in and alignment with the eugenics movement many times in her writings, especially in the scientific journal Birth Control Review. At times, Sanger tried to argue for a eugenics that was not applied based on race or religion. But in a society built on the belief of white supremacy, physical and mental fitness are always judged based on race. Eugenics, therefore, is inherently racist. She held beliefs that, from the very beginning, undermined her movement for reproductive freedom and caused harm to countless people.

Sanger was so intent on her mission to advocate for birth control that she chose to align herself with ideas and organizations that were ableist and white supremacist. In 1926, she spoke to the women’s auxiliary of the Ku Klux Klan (KKK) at a rally in New Jersey to promote birth control methods. Sanger endorsed the 1927 Buck v. Bell decision, in which the Supreme Court ruled that states could forcibly sterilize people deemed “unfit” without their consent and sometimes without their knowledge. The acceptance of this decision by Sanger and other thought leaders laid the foundation for tens of thousands of people to be sterilized, often against their will.

As a result of these choices, the reproductive rights movement, in many cases, deepened racial injustice in the health care system. The field of modern gynecology was founded by J. Marion Sims, who in the mid-1800s repeatedly and forcibly performed invasive experiments on enslaved Black women without anesthesia. In 1939, Sanger began what was called the “Negro Project” — alongside Black leaders like W.E.B. DuBois, Mary McLeod Bethune, and Rev. Adam Clayton Powell. The mission of the Negro Project was to put Black doctors and nurses in charge of birth control clinics to reduce mistrust of a racist health care system. Sanger lost control of the project, and Black women were sent to white doctors for birth control and follow-up appointments, deepening the racist and paternalistic problems of health care in the South. Continuing to this day, Black women’s experiences and pain are too often dismissed or ignored by doctors and other health care providers, which, alongside historical dehumanization of Black people, contributes to staggering and avoidable disparities in health outcomes.

In 1923, Sanger opened the Birth Control Clinical Research Bureau in Manhattan to provide birth control devices to women and to collect statistics about the safety and long-term effectiveness of birth control. That same year, Sanger incorporated the American Birth Control League, an ambitious new organization that examined the global impact of  population growth, disarmament, and famine. The two organizations eventually merged to become Planned Parenthood® Federation of America, Inc. (PPFA®).

The efforts of birth control proponents led to a 1936 court ruling that birth control devices and information would no longer be classified as obscene, and could be legally distributed in New York, Connecticut, and Vermont. While it took another 30 years for these rights to be extended to married couples (but just married couples) throughout the rest of the country, it was an historic step toward making birth control available to everyone.

The Development of the Pill

Katharine Dexter McCormick, a leader in the suffrage movement and the League of Women Voters, was head of the research process and its primary funder.

In 1956, the first large-scale human trial of the birth control pill was carried out in Puerto Rico. The step was critical to the pill’s development at the time, but the testing conducted on Puerto Rican women was done without informed consent. As many as 1,500 Puerto Rican women participated in the trial. They were told only that the drug prevented pregnancy, not that the drug was experimental or that they might experience potentially dangerous side effects. The pills used in the trial had hormone levels 20 times higher than birth control pills on the market today.

After this and other trials, the pill was refined to become the safe and effective birth control method used by millions of women today. The U.S. Food and Drug Administration (FDA) approved the sale of pills for contraception on May 9, 1960. Within five years, one out of every four married women in the U.S. under the age of 45 had used the pill.

A New Era for Women

The pill would soon change the lives of women and families across the U.S. and around the world, as an easy, effective, and reversible way to prevent pregnancy. But the pill still wasn’t available nationwide. Some states banned all forms of contraception.

In 1965, in the landmark case Griswold v. Connecticut, the Supreme Court ruled that states couldn’t deny the sale of contraception to married couples. That led ten states to legalize birth control.

Seven years later, in 1972, the U.S. Supreme Court struck down a Massachusetts law that banned the distribution of contraceptives to unmarried people in Eisenstadt v. Baird. So by the early 70s anyone — single or married — was allowed to get birth control from their doctor.

In 1970, Title X of the Public Health Services Act became law. It established public funding for family planning and sex education programs in the U.S. That meant Planned Parenthood and other reproductive health organizations were able to provide birth control and sex education services for more people, especially in low-income communities. To this day, Title X funding is critical to accessing sexual and reproductive health care.

However, in 1976, the Hyde Amendment made it illegal for people who get their health insurance through Medicaid to use their insurance to cover abortion except in a few circumstances, such as cases of rape, incest, or a life-endangering pregnancy. So even while abortion remained legal, it was becoming out of reach for people with low incomes in need of financial assistance, or for those who receive health care through Medicaid or Medicare.

Through legal victories and setbacks, Planned Parenthood continued to grow into its role as a trusted sexual and reproductive health care provider and educator, establishing affiliates in communities across the country, and becoming a leading advocate in the fight for reproductive rights.

The expansion of abortion rights in the 1970s resulted in fierce backlash from opponents of safe and legal abortion in the 1980s and 90s, with tragic consequences.

Extremists staged campaigns of patient intimidation, and committed acts of violence — including murder — against abortion providers, as well as bombings and arsons at health centers.

Also, opponents of safe and legal abortion began gaining strong political influence. The Reagan and George H.W. Bush presidencies resulted in significant setbacks to the reproductive rights movement. In 1992, the Supreme Court upheld the constitutional right to an abortion, but allowed states to put their own regulations about abortion into place. Planned Parenthood v. Casey allowed states to put limits on abortion — such as mandatory waiting periods of more than 24 hours — that made it harder for patients to access abortion care.

During this time, laws were passed that restricted federal funds from health care providers and organizations who discussed abortion with their patients — including the Title X “gag” rule and the Mexico City Policy, or “global gag rule.” In 1993, the Clinton administration reversed these rules — but it was not the last time the world would suffer from the global gag rule.

But throughout these difficult times, Planned Parenthood remained steadfast in its commitment to patients and its vision of a world without barriers to sexual and reproductive health care.

A New Millennium, a Second Century

Scientific advances in sexual and reproductive health soared as the 90s closed, and the 21st century began with the promise of expanded birth control and abortion options.

In 2000, the FDA approved mifepristone, known as medication abortion or the abortion pill, after several years of delays due to political opposition. Planned Parenthood health centers were then able to offer another safe and effective option to patients seeking abortion.

In 2005, the first Planned Parenthood affiliate began providing hormone replacement therapy (HRT) for transgender patients. In 2006, the HPV vaccine was approved, and Planned Parenthood health centers began providing this lifesaving cancer prevention method at health centers across the country. The same year, Plan B emergency contraception became available for purchase without a prescription for women ages 18+. (In 2013, Plan B and similar brands became available over-the-counter for people of all ages.)

But these advancements were tempered by a political climate increasingly hostile to reproductive health care. The George W. Bush administration reinstated the global gag rule, galvanized opponents of safe and legal abortion by passing a ban on a rarely used later-stage abortion procedure, and worked to establish a new legal status for frozen embryos. Funding for “abstinence-only” sexuality education increased, leaving students across the country without medically accurate sexual health information.

In 2009, The Obama administration overturned the global gag rule and reaffirmed America’s commitment to sexual and reproductive health at home and abroad. In 2010, the Affordable Care Act was passed. It expanded access to health insurance, allowing more people to get the health care they needed. The law includes a provision that requires insurance plans to cover birth control and preventive care services, like cancer screenings and STD testing. Planned Parenthood has worked to educate 300,000 people about the new health insurance law, helping them get coverage.

After years of state by state restrictions on abortion, in 2016 the Supreme Court ruled that states could not create rules that placed an “undue burden” on people seeking abortion, in the Whole Woman’s Health vs. Hellerstedt case — a victory for those in favor of safe and legal abortion. In response, Planned Parenthood vowed to redouble its efforts to fight abortion restrictions across the country.

Until midnight on Wednesday, every dollar you give will DOUBLE in impact. Rush your gift.