The Tuskegee Study is a syphilis research experiment that began in 1932 and lasted 40 years. It’s one of the most infamous cases of medical racism and abuse in U.S. history. With no informed consent, hundreds of Black men with low incomes were used as test subjects — enticed with offerings such as free meals, health care, and burial stipends. This highly unethical syphilis experiment was conducted by the U.S. Public Health Service (USPHS) and the Tuskegee Institute in Alabama.

History of the Tuskegee Study

In 1932, the USPHS and Tuskegee Institute claimed that the “Tuskegee Study of Untreated Syphilis in the Negro Male” was launched to observe the symptoms of syphilis. This sexually transmitted infection was incurable at the time — and, because of white supremecist thinking, it also was falsely thought to have different effects on Black bodies than on white bodies.

The study took place in Macon County, Alabama, where researchers enrolled 600 Black men over the age of 25. 399 of these men had syphilis and 201 didn’t. Researchers told them that they were being treated for “bad blood,” a term used to describe syphilis and a variety of other health issues, including anemia and fatigue (it's unclear whether the participants understood what this term meant). The men, most of whom had never seen a doctor before, were persuaded to participate in the study with the promise of free medical exams, transportation, meals, and burial insurance.

Some of the men with syphilis were given treatments available at the time — including arsenic and mercury — which ranged from mildly effective to toxic. The other infected men in the study received no treatment for syphilis at all. When syphilis isn't treated, it can cause permanent organ damage, paralysis, blindness, severe mental illness, and even death.

In 1947, penicillin became widely available as a treatment for syphilis, but it was never offered to the men at any point during the remaining 25 years of the study. Because of their race, the men in the study were viewed and treated as less-than human. They were used as research subjects, much like rats, whose sole purpose was to reveal the long-term effects of this potentially deadly disease.

In the mid-1960s, the inhumane and unethical study was uncovered by a USPHS whistleblower named Peter Buxtun, who made official complaints to the government that were ignored. USPHS officials continued the study to collect more data. It wasn’t until 1972 that Buxtun leaked documents to an Associated Press reporter, who made the Tuskegee Study public. In addition to revealing the corrupt details of the study itself, the news report also revealed the heinous fact that the infected Black men in the study didn’t know they were putting their lives at risk by participating in it, weren’t receiving treatment, or that they were spreading syphilis to their sexual partners.

Four months after the article was published, the assistant secretary for health and scientific affairs announced the end of the study. A class-action lawsuit was filed on behalf of the men and their families, resulting in a $10 million out-of-court settlement. The U.S. Public Health Service also created the Tuskegee Health Benefit Program (THBP) to provide medical care for the survivors of the study and their immediate family members. An estimated 100 study participants died of late-stage “tertiary” syphilis, with still others passing away from other conditions in which the untreated STI was a complicating factor. The last known survivor of the study participants died in 2004.

Resulting Trauma of the Tuskegee Study

The history of the Tuskegee Study is just one valid reason why Black communities still mistrust the health care system. The horrors experienced by the Black men and their families in Macon County shows how white supremacy and racial injustice are systemic issues with life or death consequences.

To this day, Black people’s experiences and pain are too often dismissed or ignored by doctors and other health care providers, which, alongside the historical dehumanization of Black people, contributes to staggering and avoidable disparities in health outcomes.

Learn more about the Tuskegee Study: 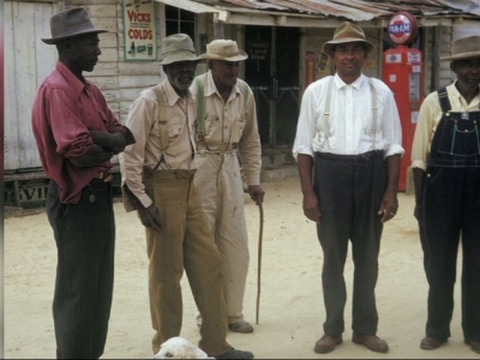 Photos from the National Archives Catalog

Planned Parenthood needs you - give now.

Make your tax-deductible gift today so we can continue to protect and provide care, no matter what.